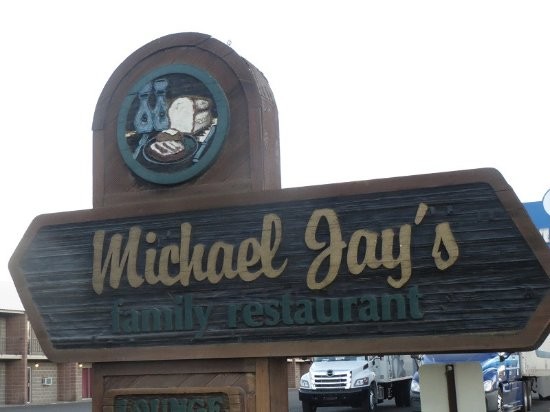 Michael Jay’s is owned by David & Casey Hart. They bought the restaurant in 1979 from the John Moon Family when the business had only been running for 5 months. Originally the M&M motel and Michael Jay’s were owned together. David and Casey were in the process of moving to Spokane area and buying a different restaurant when they got the call to purchase Michael Jay’s – this gave them the opportunity to move to Connell and come back home where they both grew up.

Michael Jay’s got its name from the 2 original owners, as their middle names were Michael and Jay – David and Casey never changed it as it had a good ring to it. They are currently the only family dining restaurant and bar in Connell. They have an All-American full menu, have a banquet room for private events and meetings as well as they also do catering for events too on and off site. David & Casey both work at the restaurant and have 14 employees total – 9 of them are full time. The most employees they have had while running the restaurant is 35, but that was many years ago when they also had a band that played on the weekends.

Michael Jay’s offers local jobs as well as family dining and the only bar in town to locals and visitors. They have been huge supporters of chamber events over the years – sponsoring fireworks, Fall Festival, Harvest Festival (Wine & Brew), and the Chamber Banquet. As well as supporting the community in other capacities too. They enjoy their loyal customers and seeing them daily and visiting as well as meeting new people who are stopping by to visit. They aren’t looking to expand Michael Jay’s but rather looking forward to retirement – they do hope that someone young and eager will want to continue with the business and they can sell and enjoy the next part of their lives.

Michael Jay’s is open Tuesday- Thursday 6am – 8pm, Friday/Saturday 6am – 9pm and Sundays 8am – 3pm, Mondays they are Closed. They are located near the south entrance of town at 710 S Columbia Ave. If you want to make reservations for dining or for the banquet room or have questions on catering, the phone number is 234-8841.