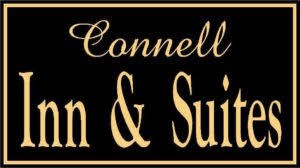 Connell Inn & Suites is owned by Valiant Hotels LLC under Jay Patel. They have been in the hotel/motel business since 1970. Jay and his son bought the motel – formerly known as the Tumbleweed Motel from Regina Janosky in April 2016. They are the 3rd owners to run the motel in Connell. When Jay bought it in 2016 they started with renovations to the rooms and exterior of the building as well, doing upgrades and many improvements. The motel is open 24 hours a day. They have rooms that offer 1,2, and 3 beds with amenities; microwave, refrigerator and cooktop.

Connell Inn & Suites has 2 full time employees. While they don’t plan to expand here in Connell – Valiant Hotels LLC does plan to continue in the hotel/motel business across the US. Jay saw that the motel needed to stay open and had a good customer base already and decided it would be a good investment.

The motel was built in 1946 with the front office, living quarters and front rooms by John & Velva Dougherty. The motel and the gas/service station which was originally a Texaco (now the Connell Gas & Food Mart) were operated and owned together by the Dougherty’s. In the 1950’s they built the pool house and then the back set of motel rooms. They sold it to the second owners Harlan & Regina Janosky in 1972. Janosky’s purchased the Annex buildings (across the street) in 1975 which had extra rooms and also housed the laundry/cleaning facility. They ran the motel and gas station until they sold the gas station to Quinton Booker in 1982-83. Then the motel, annex and pool were all sold after 44 years of ownership to the current and 3rd owners Jay & Valiant Hotels LLC in 2006.

Connell Inn & Suites is located at 433 S Columbia Ave. To make reservations you can go online to their website Connellinn.com or by calling 234-2081. They look forward to having new guests and continuing to make the upgrades and improvements to the rooms and motel to enhance every guest stay.