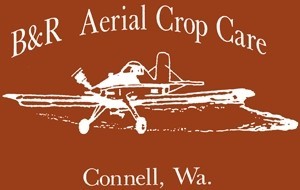 B&R Aerial Crop Care, Inc is owned by Chris & Becky Eskildsen. It is located just 1 mile east of Connell at what was once the City municipal Airport and is now privately owned. B&R Aerial Crop Care, Inc., was started in 1977 by Bernie Eskildsen and Richard Griffits, which is how it was named B & R. In the beginning, B&R started out flying off a dirt strip of Feathers Thompson on FishHook-Elgin Rd about 10 miles East of Connell. About 15 years ago, Chris took over the company from his father. Bernie continued to fly for the company as a pilot up until 3 years ago. For a couple years, Chris and Becky’s son, Jase, flew for company. So at one time there were 3 generations of Eskildsen pilots flying for B&R. As Chris's grandfather also flew but mostly for fun, it can be rightfully claimed that they have had 4 generations of pilots.

Chris is 1 of the 2 full time pilots. In addition, they also have two full time ground crew–one of which is Craig Millage who is a master of all things and is also a certified Airplane Mechanic. Becky does all of the office work.

B&R Crop Care mainly sprays fungicides, insecticides, herbicides and foliar feeds to conventional and organic crops. They also do dry seeding and fertilizing. They fly about a 30 mile radius of Connell but they also have a strip in Mattawa to fly around and land at too. They work from just before sun-up to sundown during their busy season. They can fly and work up to 6 days as week. They don't fly on Sunday as they want to have one consistent day off for their employees.

One thing that the public doesn't always realize is that aerial applicators in general, and something B&R Crop Care focuses on specifically, is that pilots are very aware of what and where people, animals and objects are at and around when they are making an application. They are very conscious about wind direction, drift, and the safety of those close by. Pilots will go out of their way to go around if they see people nearby. So, if you see an aerial applicator doing his work, please don't get close as they are most likely aware of you and will not be able to finish their job.

B&R has the pleasure of working closely with our area’s farmers and feel that they are an important support role in our area’s food supply and agriculture community. B&R Aerial Crop Care, Inc. is located at 409 Airport Lane, Connell, WA 99326. You can contact Chris or Becky at (509) 234-7791 or by emailing them at br.cropcare@gmail.com